I have spent the majority of my life discovering and vetting systems, products, protocols and devices to better your health and first and foremost … YOUR BRAIN!
Now more than ever you may have noticed increased brain fog, anxiety, inability to have restful sleep, increased irritability … to just name a few ;) Then, how about lack of focus or concentration, depression, fatigue --- forgetfulness, dementia, Alzheimer's. The list of brain symptoms that lead to lower levels of health and therefore happiness and and quality of life has become a part of the "norm."

As someone who personally has experienced traumatic brain injury, multiple concussions, Lyme, PTSD, autoimmune inflammation processes, and spinal injury to name a few, I want to offer you hope for healing. I have not only experienced tremendous healing in myself but have witnessed the self-healing of many of my patients in my 15 years of caring for people professionally.
Also, first and foremost, let it be known that I would not be alive today if it wasn't for the healing that is available to oneself through gentle and specific chiropractic adjustments --- the power that made the body, heals the body and when the nervous system is given a chance to heal by removing the interference that have stood in the way, it will. :)

Besides getting adjusted by an exceptional chiropractor, please focus on my Top 3 recommendations below and watch your brain health improve exponentially!

1. Consume Quality CBD Oil at Dosages of at Least 50mg/day to Allow Your Body the Ability to Self Correct and Increase Resilience. 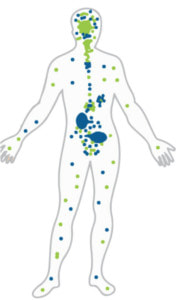 CBD Oils have shown tremendous support to the neural system both before any injury, and after even life threatening brain injury has occurred. This type of nutritional support is about pain relief and recovery–the use of standardized CBD oils from the hemp plant does not impart a psychoactive effect–but they do offer wellness support like nothing else I’ve seen. Your body has an entire Endocannabinoid system (like an endocrine system).

High points of our endogenous Endocannabinoid System (ECS) are noted in this image above.

Note this information below regarding the neurological research of cannabinoids:

(From the Medical Marijuana, Inc. educational portal): Cannabinoids have been shown to act on the CB1 and CB2 receptors of the endocannabinoid system, which in turn prevents the release of proinflammatory cytokines that are released after brain trauma and cause damage (Panikashvili, et al., 2006). Activating of the CB1 and CB2 receptors also has been shown to stimulate the release of minocycline, which reduces brain swelling and neurological impairment, and diffuses further injuries to the brain’s axons (Lopez-Rodriguez, et al., 2015) (Biegon, 2004).
In one study, cannabinoid administered to mice with brain injuries caused a significant reduction of brain swelling, as well as better clinical recovery, reduced infarct volume, and reduced brain cell death compared to the control group (Panikashvili, et al., 2001). In another, CBD was found to reduce acute and apoptotic brain damage (Castillo, et al., 2010). Piglets with brain injuries given CBD experienced less excitotoxicity, oxidative stress and inflammation (Pazos, et al., 2013).

Isn’t this astounding? Don’t you feel like you have been left in the dark and irritated that we have not been given this information 20 years ago! It is time that we all fill our endocannabinoid receptors --- 4 generations ago we ate cannabinoids every day, now our poor receptors are empty.

Check this researcher out speaking on the benefits for Diabetes, Inflammatory Conditions like Autoimmune Rheumatoid Arthritis, Osteoporosis, Concussion, etc.

Also, extensive preclinical research has documented the anti-inflammatory properties of single-molecule CBD in animal models of various pathologies, including neuropathic pain, epilepsy, rheumatoid arthritis, irritable bowel syndrome, multiple sclerosis, obesity and diabetes.
Scientists are beginning to understand the specific pharmacological mechanisms underlying CBD’s potential as a treatment for cancer, heart disease, addiction, depression and numerous other health disorders.
Cannabidiol is a pleiotropic compound that produces many effects through multiple molecular pathways. It taps into how we function biologically on a very deep level: CBD can penetrate the cell membrane and bind to receptors on the nucleus (PPARs), which regulate gene expression and mitochondrial activity.

A 1998 study sponsored by the National Institutes of Health is the basis for a U.S. government patent on the antioxidant and neuroprotective qualities of plant cannabinoids, specifically CBD and psychoactive THC (tetrahydrocannabinol). CBD and THC were found to limit “neurological damage following ischemic insults, such as stroke and trauma.” Both compounds are described as having “particular application … in the treatment of neurodegenerative diseases, such as Alzheimer’s disease, Parkinson’s disease and HIV dementia.”

Check out this research about how neuro-protective cannabinoids are:

Mice that had suffered an impact brain injury showed marked recovery in object recognition and in performing a specific task after CB1 receptors were activated (Arain, Khan, Craig & Nakanishi, 2015). Cannabinoids have even shown to be effective at offering neuroprotection in newborn babies that have experienced a brain injury (Fernandez-Lopez, Lizasoain, Moro & Martinez-Orgado, 2013).
By acting through the CB1 and CB2 receptors of the endocannabinoid system, the cannabinoids provide a neuro-protective response, prompting researchers to conclude that they can be a useful treatment for acute spinal cord injuries (Arevalo-Martin, Garcia-Ovejero & Molina-Holgado, 2010) (Arevalo-Martin, et al., 2012) (Arevalo-Martin, Molina-Holgado & Garcia-Ovejero, 2016).

If you wish to purchase standardized, nourishing, purity-tested and potent CBD oils from hemp, you can do so here.  I love the support it gives your brain. I love watching my patients who are taking at least 50 mg/day feel whole again, able to curb their anxiety, their pain and even stop being triggered from past emotional traumas. For healthy support for brain health, I recommend the Pure Starter Pack of CBD Oil with CBD oil and CBD capsules.

2. Use Photobiomodulation with Binaural beats and Isochronic Tones For at Least 20 Minutes Every Day. (Say what???!)

Yes I know that was a mouthful but I am a big fan of an exceptional home device for creating a higher quality of life called the BrainTap headset. When used in conjunction with the BrainTap App which you can try for free here, the brain is literally DE-FRAGGED within 10-30 min sessions and there are almost 800 different sessions to choose from. These sessions are on topics like healing from trauma, helping a person get into deep delta brain waves for improved sleep, smoking cessation, and deep stress relief. There are programs for children and weight loss and meditative journeys, and musical journeys. It truly is one of the most cost effect therapies a person can do at home for brain balance and recovery.

How Do Binaural Beats Work?:
What the Heck are Isochronic Tones? 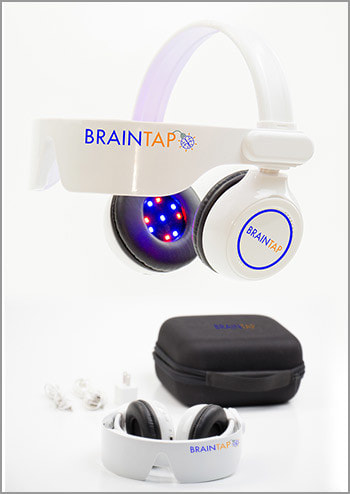 3. Consider the Profound Effects for Re-Training Your Brain Using Neurofeedback.

Check out this research on the effectiveness of neurofeedback on those (children and adults) suffering from ADD/ADHD!

Learn how neurofeedback has been shown to decrease hyperarousal of those suffering from PTSD.

Ready to get started on your specific neurofeedback sessions? You can visit our scheduling software online anytime and schedule for an introductory Brain Map to begin learning about your brain’s health and begin custom protocol neurofeedback based on the discoveries in your initial brainmap.
Tweet Share Pin It Email

You Know You Are Neurotoxic When? Have you ever wondered why stepping outside and getting a breath of fresh air can actually help improve your mood? The greatest reason for this is because of negative ions, which are oxygen atoms charged with an extra electron.